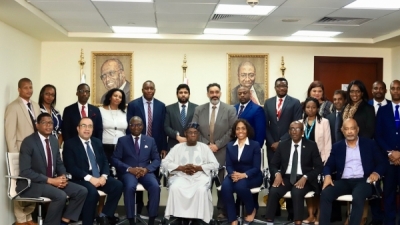 ---
Cairo, 8 June 2019 - The Advisory Council of the 2020 Intra African Trade Fair (IATF2020) has met in Cairo to discuss the arrangements toward the organisation of the trade fair to be held in Kigali in September 2020.

The meeting, held at the headquarters of the African Export-Import Bank (Afreximbank), follows the signing of the IATF2020 hosting agreement, the launch of the trade fair in Kigali on 14 May and the engagement of Reed Exhibitions and Brand Communications as the event organisers.

Members of the IATF Advisory Council in Group photos

Chief Olusegun Obasanjo, Chairman of the Advisory Council, said that the early signing of the hosting agreement would allow for formal conversations and preliminary planning around the trade fair to begin.

Chief Obasanjo, a former President of Nigeria, said that the Advisory Council would strive to surpass the results achieved in IATF2018 and expressed confidence that, “with the commitment and leadership demonstrated by Afreximbank and its partners, IATF 2020 will be a great improvement on IATF2018”.

Also in attendance at the meeting were Jean-Louis Ekra, the Deputy Chairman; Kanayo Awani, Managing Director of Afreximbank’s Intra-African Trade Initiative; and representatives of the African Union, the Government of Rwanda, and the Afro-champions Initiative, as well as members of the IATF2020 sub-committees.

Reed Exhibitions has been engaged as the IATF2020 trade fair organiser while Brand Communication, a branding, marketing and advertising agency, will handle the conference segment of the event.

The inaugural Intra-African Trade Fair was held in Cairo in December 2018.