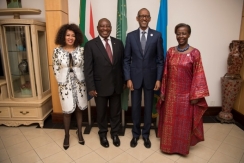 South Africa President Cyril Ramaphosa has declared that the political issues that have characterized Rwanda and his country in the past is already in the ‘basket of ‘solved’.

In 2014, diplomatic relations between the two countries turned sour – leading to the expulsion of diplomats from both Kigali and Pretoria. 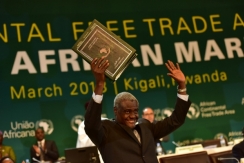 This morning March 21, 2018, African leaders, right from President Paul Kagame – the Chairman of the African Union, African Union Commission Chairman, Mousa Faki Mahamat as well as President of Niger – Mahamadou Issoufou recalled the years as if it was yesterday.

The leaders and the entire African continent paid tribute to the unique African son – former President of Ghana Nkwame Nkrumah, who launched the Pan African movement that later gave birth to the current African Union.